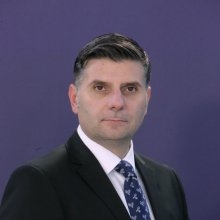 Alexandru Petrescu is the Minister for Communications and Information Society in the Romanian Government (since November 2018), having served previously as the Minister of Economy and Minister for the Business Environment, Trade and Entrepreneurship (2016-2017).

Alexandru Petrescu built an overall successful career in banking & telecom industry in the United Kingdom and across Europe, from a Business & Economics graduate of the University of Wales to assuming high-end Board of Directors & executive positions within the financial services & banking sector in the United Kingdom, with a strong focus on enabling across Europe telecom and postal administration operators to expand their portfolio of services with additional financial & banking services, to enhance their commercial & social role to better service worldwide customers.

In the last couple of years, whilst running as the CEO, the largest Guarantee Fund for SME’s in Romania, was appointed Member of Board of the Brussels based, European Association of the Guarantee Funds and Member of the Board, of the Copenhagen based, Eurogiro, a worldwide association of postal organisations, telecom operators, post banks, commercial banks and other payment service providers.

From the position of Minister for Communications and Information Society, Alexandru Petrescu is a fervent supporter of the implementation of the Digital Agenda, e-government accomplishment, pro-business & innovation regulatory policies for the industry, private and public investment for postal services and overall sector digitisation.

Alexandru Petrescu is a member founder back in 2010 of the Romanian social-democrats living in diaspora organization, holding over the years multiple political positions within the Social Democratic Party and an active policy and governmental programme maker.