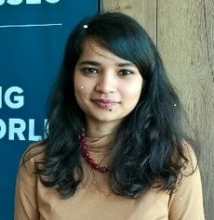 Anushka Kaushik is currently heading the Cyber Resilience Program at the GLOBSEC Policy Institute, based in Bratislava, Slovakia. She’s responsible for developing the cyber initiatives of the organization and driving its research effort in cybersecurity and policy. Prior to joining GLOBSEC, Anushka worked on data protection policies and internet governance at the International Chamber of Commerce in Paris. With the Commission on the Digital Economy at ICC, she helped develop a cybersecurity guide for businesses that aimed to provide companies with a framework through which they could protect themselves, which emphasised a response mechanism to cyber events through an organizational institutionalised process. While at ICC, Anushka also contributed to policy papers on the scope of IoT and the use of ICTs for reaching the Sustainable Development Goals (SDGs). On assignment with the Ministry of Electronics & Information Technology in New Delhi, she analysed the digital and e-Governance campaign of the Indian government while working with the Publicity and Awareness Division of the National e-Governance Division (NeGD). Her primary focus was on e-governance and implementation of ICT tools in rural areas and media representation of e-Governance issues in print and online news portals. Anushka has also worked with the Alexis Centre for Public Policy and International Relations, based in India, on Sino-Indian military relations and security policy. Anushka has a Master’s in International Security from Sciences Po, Paris where her focus was cyber strategies, defence and security economics, and application of international law. During her studies, she also conducted research on digital networks, information privacy, and attribution in cyber-attacks with an emphasis on geopolitics and broader policy implications. While at Sciences Po, Anushka undertook a research associate position at the Centre des Recherches Internationales (CERI) for the Chair of Excellence in Security Studies in association with the EU NonProliferation Consortium. Her research involved an analysis of vulnerabilities of epistemic communities in the 21st century nuclear age as well as developing and launching Nuclear Knowledges, an online portal for the dissemination of the Chair’s research work. Anushka majored in journalism and communications in her undergraduate studies at Lady Shri Ram College for Women, University of Delhi and wrote her thesis on the media representation of the Israel-Palestine conflict using discourse analysis. She has previously worked with the Centre for Science and Environment, a think-tank focused on environmental policy, and extensively contributed to their publication. She has also worked with Sciences Po’s alumni association as the editor of their official publication.