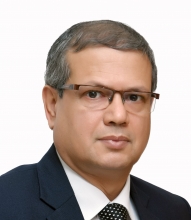 Thereafter, he served in the Human Resources Department of the Bank’s Local Head Office in Ahmedabad, where he was instrumental in introducing the concept of computer-based Human Resources Management System, and codifying the Bank's instructions related to human resources.

Mr Tambe served as the Branch Manager of Chavaj GNVFC Complex branch near Bharuch in Gujarat from 1999 to 2001, and during his tenure the branch was computerized and also won the Best Customer Service award. For the outstanding work done in Chavaj GNVFC Complex branch, he was elected to the Chairman’s Club of the Bank. During his tenure in this branch, he introduced the concept of centralised processing of retail loans on automated platforms.

In 2001, he was posted to the Bank's New York branch as Vice President (Deposits and Remittances). During his tenure at New York branch, he was instrumental in upgrading the policies and procedures of the branch, especially those related to BSA/AML. ACH as a mode of remittance was introduced during his time. He developed a computer program for handling redemption of India Millennium Deposits in December 2005, to ensure that the process is fully compliant with the U.S. regulations.