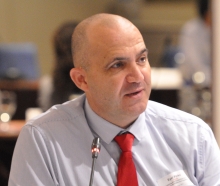 Eyal Pinko (Navy Commander, retired) served in the Israeli navy for 23 years. In those years he served 4 years in operational duties, 12 years as a project manager for several development programs, and for more than 6 years, as the head of operational and research branch at the Israeli naval intelligence.

Eyal served for 5 more years as the head of division at the ministry of defense (Civilian rank equal to RADM).

Since August 2017, he is a senior consultant for cyber and maritime cyber, focusing in cyber strategy, risk assessment, threat analysis, risk management and awareness.

He holds bachelor’s degree with honor in electronics engineering, and two master’s degrees with honor in political science and in organizational development.

Since 2015, he has been a PhD candidate at the Bar-Ilan university and a Research Fellow at the Haifa Maritime Policy and Strategy Research Center. His research focuses on strategy, asymmetrical and hybrid warfare, cyber and weapon systems.