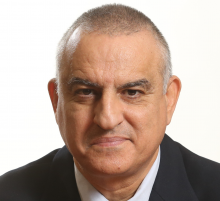 Dr. Gabi Siboni is a National Security Specialist and the Director of the Military and Strategic Affairs Program as well as of the Cyber Security Program at the Tel Aviv University's Institute for National Security Studies (INSS). Dr. Siboni is also the editor of Cyber: Intelligence and Security Journal. He serves as a senior consultant to the IDF and other Israeli security organizations. In his extensive IDF career, Colonel (res.) Siboni served as a fighter and commander in the Golani Brigade and completed his service as commander of the brigade’s reconnaissance unit. Within the scope of his reserve service, Colonel (res.) Siboni served as senior staff officer of the Golani Brigade, A Division's chief of staff and presently as a senior planner for the IDF. In addition, Dr. Siboni is the deputy and chief methodologist of the IDF's Research Center for Force Deployment and Buildup. In this scope, he develops Strategic & Operational warfare concepts for various domains including: Integrated Combat in complex and densely populated areas, Cyber defense and Cyber warfare, Cognitive and Influence warfare and more. He also develops methodologies for Computerized Simulation for various needs including for Military Operations. Gabi’s professional standing in the security community is reflected in his being responsible for the organization of DCOI – the INSS USA – Israel Cyber Security Summit for the past three years. DCOI 2016, held in Washington DC in May, was a concerted effort of the state of Israel and INSS that aimed at enhancing collaboration between the two countries in cybersecurity. The summit was supported by Israeli state agencies and major private companies from across the U.S. Keynote speakers at this year’s event included: Admiral William S. Rogers – Director, NSA; Alejandro Mayorcas – Deputy Secretary, DHS; General David Petraeus – Former Director, CIA; Richard A. Clarke – Former White House National Coordinator for Security & Shawn Henry – Former Assistant Director of the FBI Cyber Division. Dr. Siboni is a consultant in a wide range of fields, including: Cyber Security (including ICS and SCADA Security), Information Technology, ICT & Cloud Risk Management, and Strategic Planning. He has extensive proven experience in Decision Support Systems (DSS) related to Cyber Security Investment, and Security & Safety Control Systems. His consulting firm, G. Bina, provides security and cyber-security advisory services across the top tier of the Israel private sector, including its infrastructure and defense firms, as well as most sensitive government, military and intelligence agencies. It also works in India supporting one of its critical financial markets infrastructure institutions and is active with major firms in Europe. Dr. Siboni holds a B.Sc. and M.Sc. in engineering from Tel Aviv University and a doctorate in Geographic Information Systems (GIS) from Ben-Gurion University.