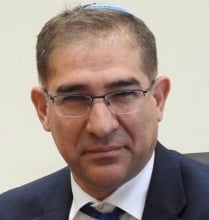 Netanel (Nati) Cohen, the Director General of the Ministry of Communications, was appointed in April 2018. Cohen, born in 1968, is married, father to five children and a grandfather. Lives in Modiin.  Cohen holds a diploma in Electronics Engineering, and also holds B.A in Political Science and Middle East studies and and MA in National Security and Political Science. Cohen started his military career in 1986, and served as a commander in a variety position in the telecommunications fields.